Affiliate Disclosure: When you buy through links on our site, we may earn an affiliate commission at no cost to you.

What’s the Toughest Pitch to Hit in Baseball?

You might get scared looking at the sheer velocity in the playground; however, let’s save them for the experienced ones. If you’re a newbie, you should know the basics first and then move ahead to the pro level.

We are here to learn about some of the nastiest pitches to hit in baseball. Although opinions vary among people while shortlisting the toughest pitches, I have shortlisted five, which most people agree with.

These five pitches that are considered one of the nastiest to hit in baseball are- fastball, curveball, knuckleball, cutter, and slider. Let’s learn about each of these pitches one by one and why they are so hard to hit. 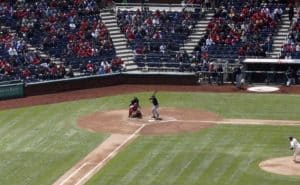 5 Nastiest Pitches of All Time

Fastball is undoubtedly the most difficult to hit in baseball. There are two types of fastballs- four-seam fastballs and two-sem ones.

The four-seam fastball rotates backward, and there isn’t much movement in the ball. The main aim of a four-seam fastball is to reach the strike zone as fast as possible. If thrown correctly, the hitter most of the time misses the hit.

Another toughest pitch to hit is the cutter, and as the name says, it can break the bat if done right. When the cutter reaches the home plate, it moves away from the pitcher’s arm side.

A pitcher holds a slider ball towards the glove’s side and depth. You can identify a spinner by looking at a tight spin and a red dot. Spinners usually have a 3 to 6 inches break and are 9 to 12 mph slower than a four-seam fastball.

A curveball has a straight spin and usually has a 6 to 12 inches break. Curveballs have more depth than a slider, and their speed is 12mph slower than a fastball.

Knuckleball is thrown very slow and has a very unpredictable movement. Due to this unpredictability, a knuckleball is quite hard to hit. The ball, when it comes into the zone, has almost no rotation, which makes the ball flutter.

Why Are Certain Pitches So Hard to Hit?

Different pitchers come with different playing styles, and the same goes for the hitter as well. Therefore, hitting a hardball coming at the hitter with full effort becomes the most difficult act in baseball.

Hence, sometimes batters let go of the ball, and some players learn to calculate the speed and hit them in certain ways. Some pitchers also try to mess with the batter’s timing and make the ball move after the batter decides to commence a swing.

Thus if the ball performs unpredictably midway or if the spitter drops the ball on the home plate or right before, chances get very low for the hitter to have a solid swing.

Also, batter’s used to judge the spitter’s arm speed to calculate how fast the ball will come, but in recent times spitters have mastered the art of changeup.

Pitchers might depict that they are going for a fastball with a faster hand swing, but they will keep a soft grip to let the ball swing slowly. This causes batters to swing too early and miss the hit.

Pitchers who are capable of frequent changeups and adjusting the speed of sliders and splitters get frequent success in games.

You might wonder if sliders and spitters are the hardest pitches to hit; why don’t pitchers always follow the same technique? It is due to the torque in their physics called shoulder and elbow.

The body’s natural movement does not allow us to throw things as hard as possible overhand. This also leaves the pitchers with the risk of major arm issues and surgeries.

The elbow risk gets more prominent while throwing straight fastballs, siders, and spitters. The slider requires a twisting technique at the release of the ball, and the same goes for the spitter. This twisting action isn’t much appreciated by the body, and the player may end up in a hand injury.

Additionally, throwing continuous hard pitches can be tiring, and ultimately you will lose your stamina to keep going throughout the play. Experienced players understand this condition; hence they try to keep up their stamina with combination moves.

Fastballs have different variants, and it varies from player to player and also based on grip and arm action. In certain cases, the location can be a huge deciding factor for the fastball.

Pitchers throw the spitter only when they know it is working in that particular match.

For instance, former big players like Roy Halladay and A.J Burnett got a whiff rate of 39.6% and 48.3% with curveballs.

The trick to throwing a knuckleball is that you need to have your fingernails grip and toss it with a straight wristed pushing motion. This move will restrain the ball from spinning like a normal pitch.

This throwing technique will result in an aerodynamic phenomenon that will make the ball float, flutter, jump and bounce as air molecules grab at the ball’s seams.

The difficulty of hitting a knuckleball depends on the hitter. Some hitters find knuckleballs extremely difficult due to the unpredictability of the movement and slow velocity.

Apart from all the technicality and movements, game circumstances play a great part in making or breaking a deal. Professional pitches consider game situations like- game score, a number of outs, runners on the base, etc., before going for a pitch.

Have you learned interesting facts about hardest-hitting pitches in baseball? If you are an aspiring baseball pitcher, keep the above information in mind. Even though the moves might seem a bit complicated to learn, with practice, you will master the tricks. Pull up your socks and get going!

Why are Softballs Bigger than Baseballs?

Which Baseball Bat Hits the Farthest: Aluminum Vs Wooden Bats

15 Baseball Drills for 12 Year Olds (Fun and Discipline Together) From playing kindergarten softball to playing in college baseball – I have been through it all. I know firsthand that nothing beats the cheers and adoration of the crowd when Why are Softballs Bigger than Baseballs?

Softball and baseball may look similar, but there are some certain differences between the two games! The most noticeable difference is the size of the ball. Grab a baseball and Which Baseball Bat Hits the Farthest: Aluminum Vs Wooden Bats

The first baseball game was played with a wooden bat, and these bats have come a long way! However, some players now prefer metal, more precisely aluminum bats, because of